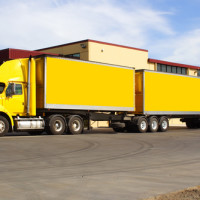 A proposed new law, currently before the U.S. Senate, would override existing state laws to allow semis pulling extra-large double trailers on U.S. highways. The provision included in a Transportation, Housing and Urban Development appropriations bill specifically states that what is known as “twin 33s” (ie, twin trailers that are 33’ long, each) will be allowed on all roadways that are part of the National Highway System. In places such as the Hudson Valley, this includes some narrow, older roads and bridges, and residents could expect to see the double trailer trucks in Kingston, Albany, Middletown, Rochester, Poughkeepsie, and Newburgh, which are all connected to the National Highway System. Trucks pulling twin 33’ trailers reach a total of 84’ in length, which is more than a quarter of the way down a football field.

Advocates for the changed laws cite the proliferation of online merchants and shipping of many small packages, creating a greater total volume of packages being shipped, but not always a greater weight. This leads to trucks with full trailers that are underweight limits and more trucks on the road. Opponents of the double trailers cite extensive safety concerns. Rates of truck accident fatalities are already climbing, having risen by 17% in the last four years. Between 2013 and 2014, Upstate New York saw 6,779 non-fatal large truck crashes, and 357 fatal truck accidents between 2009 and 2014. While large tractor-trailers already require a greater amount of time to reach a complete stop than do passenger vehicles, trucks pulling double 33’ trailers require 20 feet to come to a stop, which is 10% longer than even double 28’ trailers. The twin 33s are the size of an eight-story building, have much more substantial blind spots, and need an additional 6 feet in their turning radius as compared to single-trailer trucks.

As of now, only 18 states allow twin 33’ trailers on their roads, and 39 states have length restrictions on trucks that currently keep such trucks off their roadways. U.S. Senator Charles Schumer of New York has voiced strong opposition to the proposed change. Senator Schumer stated, “the fact of the matter is, these longer, double-hitched tractor-trailers are a tremendous road safety risk to people and infrastructure alike: they take longer to stop, they have wider turning radiuses, and they place a greater strain on our roads and bridges which are already in need of repair.”

Large trucks and tractor-trailers pose numerous safety hazards on New York roadways and can cause immense damage to smaller passenger vehicles. Proving liability in an accident with semis and tractor-trailers can involve a complex factual investigation. If you or a family member have been injured in an accident with a large truck or semi, contact experienced Albany personal injury attorneys at Basch & Keegan for a free consultation on your potential truck accident lawsuit, at (845) 251-4545.