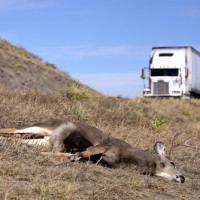 If you’ve been driving for any length of time along rural and wooded roads on the East Coast, you’ve surely either seen for yourself or heard from a friend a horror story of an encounter with a deer on the road. Striking a deer isn’t just bad for the animal; it can destroy even substantial cars and trucks, and even result in fatal injuries for a driver. Read on to learn more about deer accidents, ways to avoid them, and what to do if it happens to you.

As winter sets in, accidents caused by or involving deer start to rise. Drivers are most at risk of colliding with a deer between October and January, the deer mating and migration season, with November having the highest rate of deer-vehicle accidents. These accidents are most likely to occur when deer are most active. This typically occurs at dusk and dawn, the hours between 5 a.m. and 8 a.m., and from 5 p.m. and midnight. Drivers should exercise additional caution when driving alongside forested areas during these times. Use your high-beams when you can, and remember that once you see one deer, there are likely more nearby, so remain on your guard. If a deer remains frozen in your headlights, honk your horn continuously for a long time.

Deer-vehicle accidents can be both costly and, in some cases, deadly. The Insurance Institute for Highway Safety reported that approximately 191 drivers are fatally injured each year in accidents caused by an animal crossing the road, which is most likely to be deer. State Farm Insurance estimates that one in 159 New York drivers will get in a deer-vehicle accident. Considering that such accidents are improbable in dense urban areas, the chances of such an accident are likely even higher in wooded areas of the Hudson Valley. Such accidents have become increasingly common in recent years, as development expands into previously-rural areas, forcing deer out of their former habitats.

Living in an area where deer accidents are more common is yet another reason why it’s important to have comprehensive auto insurance. When you strike a deer, there’s no other driver involved who could be responsible, so the primary way to receive compensation for damage to your car is a claim filed with your insurer against your comprehensive coverage. When the accident occurs, you’ll want to document it as carefully as possible. Take photos of the scene of the accident, documenting the animal itself, if possible. However, do not try to move the deer, as a wounded deer can do a great deal of damage with its sharp hooves and powerful legs. As with any single-vehicle crash, it can sometimes be difficult to prove to your insurer that the conditions under which the crash occurred were as you reported them to be. If possible, obtain witness contact information, and enlist the services of an attorney to ensure that you receive all compensation you’re owed in a deer-auto collision.

If you or a loved one have been hurt in a car accident in or around New York’s Hudson Valley, contact Kingston’s talented personal injury law firm Basch & Keegan for a free consultation on your claim, at (845) 251-4545.