You’ve seen it before: driving home late at night, the car in front of you is swerving, gradually listing toward the shoulder, then correcting; perhaps driving slower than the speed limit. There is a good chance that the driver is simply overtired. Driving drowsy can be just as dangerous on the road as driving drunk. Read on to learn more about the dangers of drowsy driving. 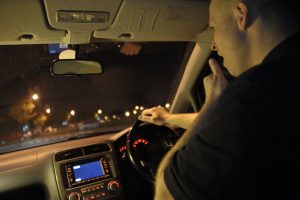 Statistics on drowsy driving are difficult to capture, as there isn’t a perfect objective measure of when someone is too tired to drive and, like driving drunk, most people think they can force themselves to be alert enough to drive. According to the National Highway Traffic Safety Administration, approximately 2.5% of fatal crashes are caused by drowsy driving, as are 2% of nonfatal accidents. However, the organization estimates that between 5,000 and 6,000 fatal crashes are actually caused by drowsy drivers.

Not only is serious sleep deprivation dangerous, but simply not getting enough sleep each night can make drivers much more dangerous on the road. Research conducted by AAA found that drivers who got between six and seven hours of sleep a night were twice as likely to be involved in a sleep-related crash than those who got 8 or more hours’ sleep. Drivers who got less than 5 hours were four or five times as likely to be in a crash.

It can be difficult to tell whether someone was drowsy prior to a crash since there is no test for fatigue like there is for alcohol consumption. However, investigators and experts may be able to identify patterns in an accident indicating that the driver was drowsy. For example, if there are no skid marks leading up to a rear-end crash, that can indicate that the driver was asleep prior to the crash, as this indicates that the driver did not see the stopped car in front of them at any point.

If you were injured in a crash in the Albany, Poughkeepsie, or Kingston area, and believe that the responsible driver made the choice to drive when not at full cognitive capacity, contact experienced car accident law firm, Basch & Keegan, for a free consultation on your case at (845) 251-4545.