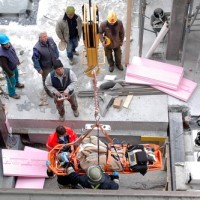 Construction work can be dangerous, but if the worksite complies with established federal and state safety laws and standards, it shouldn’t cost you your life. A smart construction worker understands that the best way to ensure safety on the job site is through personal vigilance and care for one’s own well-being. However, some jobs on the site are objectively more dangerous than others, requiring additional attention to safety.

An Occupational Safety & Health Administration (OSHA) report examined the 796 construction site deaths that occurred in 2013 to determine their cause. The safety oversight body found that over half of the nearly 800 fatal injuries were from the same so-called “fatal four” causes: falls; being struck with an object; electrocution; and workers being crushed or caught in or between small spaces. Falls far outstripped the other accidents as the most common fatal accident on a job site.

As a worker, you’re entitled under OSHA regulations to a work environment that is “free of known dangers,” and many additional safety regulations govern best practices to ensure that those dangers are controlled. It is no coincidence that some of the most violated safety standards relate to fall protection on a job site. If you fear that your employer is not in compliance with applicable safety regulations, you are entitled to request information on injury rates, safety information, training, or an OSHA inspection.

While no one wants to single themselves out as a whistleblower for fear that they may not be hired again, there are protections in place under the Occupational Safety & Health Act to prevent retaliation from an employer against an employee who exercises their right to an OSHA inspection. If you believe that you have been blacklisted, transferred, had your hours reduced, been turned down for a promotion, or otherwise punished, you should file a report detailing the retaliation to OSHA within 30 days.

Additionally, you hold the right to refuse to perform a task at work when you believe a workplace condition puts your health and safety in peril, if your employer has refused to remediate the dangerous condition, and if you reasonably believe that the condition puts you in danger of serious injury or death, and there would not be enough time to have the condition inspected by OSHA.

If you have been injured or encountered unsafe conditions on a New York job site, consult with the experienced Hudson Valley personal injury and construction accident lawyers at Basch & Keegan for a consultation.